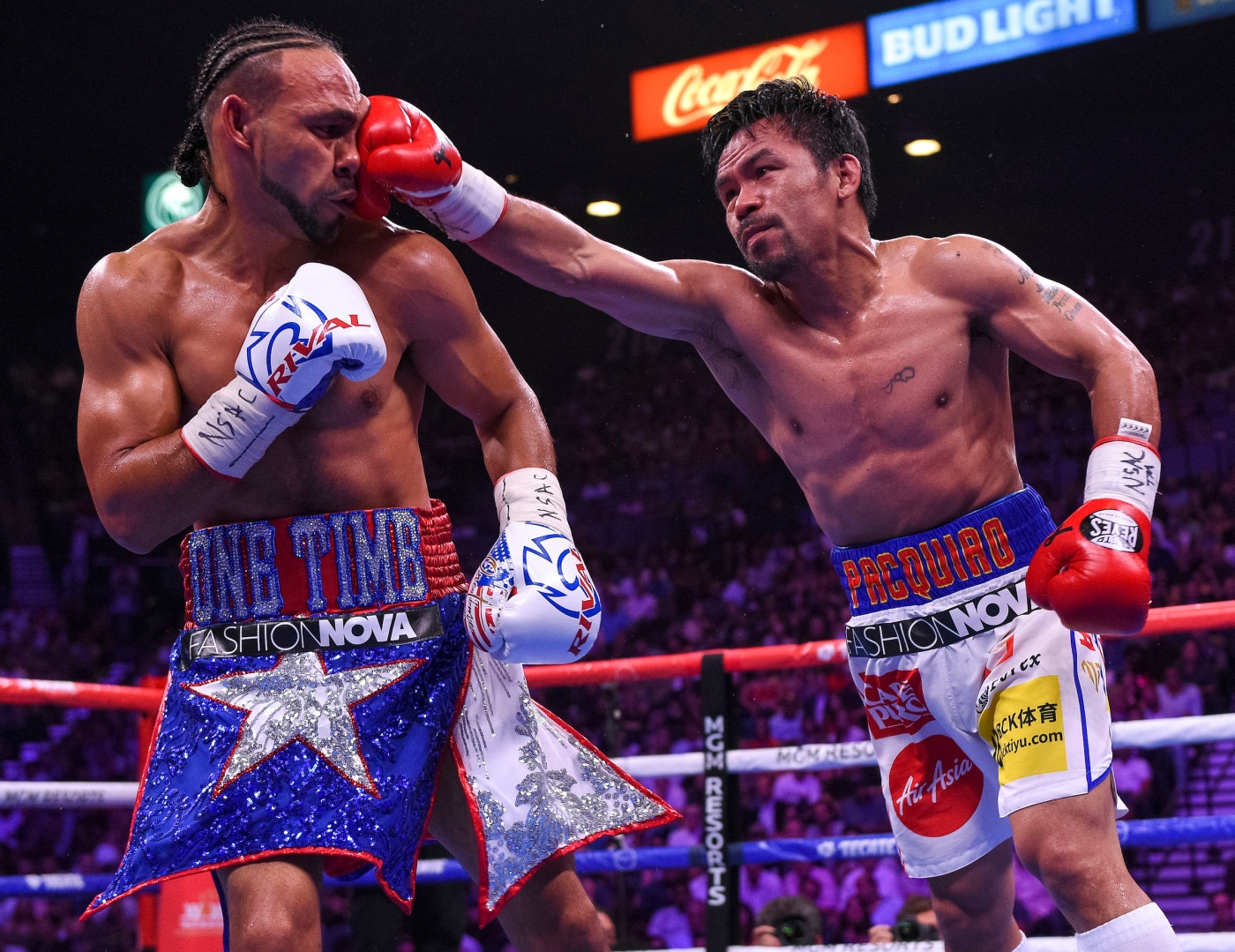 Manny Pacquiao (62-7-2) SD12 Keith Thurman (29-1): Expectations aren’t what they once were for Pacquiao, 40, which is why his decision over Thurman on Saturday at the MGM Grand in Las Vegas to become the oldest fighter ever to win a welterweight title deserves our full appreciation. Vintage Pacman is long gone, but the dude who showed up for Thurman was the best version of his current self – still quick, active and powerful, but at a notch or two below his prime levels. Thurman was either caught off guard or, after fighting just once since March 2017, still working out the kinks. A Pacquiao right hand caught Thurman for a first-round knockdown, and the old fart didn’t slow down until Round 6. Thurman battled back on the scorecards, but a 10th-round body blow from Pacquiao stopped Thurman in his tracks, turned the momentum and ended his last chance to earn a decision. From a financial standpoint, Errol Spence and Bud Crawford make sense as potential next opponents for Pacquiao – but they are awful choices from a Manny-might-want-to-enjoy-his-grandkids perspective. Thurman will need a bounce-back win or two against next-tier competition to lure one of those two into a matchup.

Teofimo Lopez (14-0, 11 KO) UD12 Masayoshi Nakatani (18-1, 12 KO): Lopez wasn’t “horrible” at the MGM National Harbor in Oxon Hill, Maryland, as he (and the Twitter hordes) said after Friday’s fight. But he did look like a 21-year-old kid who struggles to make the lightweight limit – one who had never faced an opponent as tall, rangy, smart and aggressive as Nakatani. After some close early rounds, Lopez found his timing and range in the fourth, breaking through with a sharp jab-left hook combo. Nakatani began closing range, despite his length, and forcing Lopez to readjust. As late as Round 10, Nakatani found a home for three big right hands. But over the course of the fight Lopez, who had never been past seven, was busier and at least slightly better – just not nearly 118-110 (twice), 119-109 better. It was a tough fight to score, sure, but that’s the job. Tough shit. Do better. In the aftermath, Lopez claimed (rather unconvincingly) that 130-pound titlist Richard Commey was on deck and then, theoretically, a unification bout with Vasiliy Lomachenko was in the hole. That bluster sounded more like his old man talking, though. Ultimately, a move to 135 may be necessary.

Dillian Whyte (26-1) UD12 Oscar Rivas (26-1): Is it just me, or is the heavyweight division all growed up? Now that a main event featuring B Tier heavyweights is no longer a punch line, London turned out for Saturday’s show at the O2 Arena. (Who are we kidding? Those beautiful wankers show up for everything.) Whyte and Rivas didn’t consistently reward the watchful eyes – look, nobody wants a chess match between Godzilla and Hydra – but there was enough occasional action to make it borderline interesting. Whyte threw his jab with greater confidence, and success, as it became clear Rivas wasn’t willing to risk exposing himself with a counterpunching attack. The Cuban finally broke through in the ninth with a booming left hand that dropped Whyte. But Rivas’ odd, fight-long passivity got the best of him again and the Brit recovered to more or less coast to a 115-112 (twice), 116-111 decision. The fight was an eliminator for one of the ignoramus belts, but you know how it goes. Your guess is as good as mine who either man fights next.

Dereck Chisora (31-9) KO2 Artur Szpilka (22-4): The knockout of the week belonged to Chisora, who pressured Szpilka against the ropes in Round 2 and unspooled a pair of wicked body shots before landing a clean straight right upstairs to set up the finish. With Szpilka’s hands high now, Chisora came back with a similar combination – right to the body, left to the body, but then hooked a right hand through the guard that rocked Szpilka’s chin. With the Pole’s gloves now slack, Chisora slung a left and followed with a looping righthand hammer that slumped Szpilka, knocking him from his senses before he hit the canvas, and prompting referee Mark Lyson to step in and call it. The win maybe – maybe – puts Chisora in position to ask, pretty please, for a B-side slot against a top heavy. But he’s 35 and already has lost twice to Whyte (including a knockout defeat in December) and Tyson Fury, and has found himself lacking in every other step up.

Subriel Matias (14-0, 14 KO) TKO11 Maxim Dadashev (13-1, 11 KO): Dadashev was considered the slightly more accomplished fighter going into Friday’s fight, but the threat of Matias was never misunderstood. Early on, trainer Buddy McGirt directed Dadashev to throw single shots to the body and get out of range, hoping to gradually slow Matias’ charge forward. Instead, Matias’ power had the opposite effect, sapping Dadashev’s legs and turning the fight into a hold-the-line war. It was an awful development for Dadashev, who gamely stood his ground but absorbed a world of punishment for it. At the end of Round 11, McGirt pleaded with his fighter to allow him to stop the fight. When Dadashev hesitated, McGirt made the decision for him – and it may have saved the Russian’s life. After Matias landed a total of 266 power punches – so many of them flush shots to the head – Dadashev had trouble leaving the ring, began vomiting while being wheeled out of the arena on a gurney, then lost consciousness in an ambulance on the way to the hospital, where he underwent surgery to relieve the swelling in his brain. The scene was the worst boxing has to offer. Recovery is possible, but Dadashev may never be the same and has surely made his last fight.

Luis Nery (30-0) KO9 Juan Carlos Payano (21-3): Is Nery for real? The hope was that Saturday’s fight with Payano, a former junior featherweight titlist, would answer the question and nudge the gifted 24-year-old Mexican closer to a showdown with bantamweight kingpin Nayoa Inoue. Nery got there, eventually, but a slow start and a number of clumsy exchanges with Payano did little to fire up the furnace on the hype train. He salvaged the performance with his 11th straight knockout – a gorgeous left hook to the ribs that crumpled Payano to his knees and, after some brief contemplation, sent him grimacing in pain onto his back. Because of the timing, if nothing else, Nery might squeeze in another fight before any potential matchup with Inoue, whose date with Nonito Donaire and the WBSS bantamweight finals hasn’t even been set yet.

Caleb Plant (19-0) TKO3 Mike Lee (21-1): Look, I’ll be perfectly honest. I was still getting settled after picking up a pizza and making a beer run when this one started, so I honestly can’t recall (or maybe just don’t care to revisit) all the details. Was it three official knockdowns? Four? A slip might have been ruled on one of Lee’s trips to the canvas. Suffice to say, Lee had nothing for Plant, a slick, quick-twitch super middleweight titlist who certainly passes the eye test. We’ll need to see him in with more than Lee to know what he’s all about, and with any luck we’ll get a Plant-Callum Smith matchup for all the 168-pound marbles. All I really know: chicken does not legitimately qualify as an ingredient on a meat lovers pie, but it’s nevertheless a solid move.

Yordenis Ugas (24-4) UD12 Omar Figueroa Jr. (28-1-1): The less we talk about this fight, the better. Figueroa is a former lightweight titlist, and as much as you want to give the benefit of the doubt to a guy with his cojones, he has been stunted – maybe irredeemably – by injuries, weight issues and disastrous training. (For the Ugas fight, Figueroa trained himself, which is akin to an NFL team hiring its kicker to be head coach.) Ugas, a workmanlike welterweight contender, was too long, strong and busy for Figueroa by miles. The Cuban scored a first-round knockdown with a big right hand that left a staggering Figueroa briefly tangled in the ropes, and it was target practice for the next 11 rounds. Just ugly. For Ugas, 33, another crack at Shawn Porter, who took a split decision (arguably undeserved) from him in March, might be his best immediate bet. He’d likely welcome a payday against one of the other titlists at 147, but none of those matchups would otherwise serve him well. Levels and all that.

Tureano Johnson (21-2-1, 15 KO) TKO9 Jason Quigley (16-1, 12 KO): Quigley, a former No. 1 world amateur middleweight, was expected to be pushed, not pummeled, in Thursday’s matchup with Johnson. But here we are. Johnson imposed his will after the first couple rounds and landed a body shot in the ninth that sealed it, prompting Quigley’s corner to surrender. Bear in mind: Johnson, 35, fought Fernando Castaneda to a draw in February – his first bout since being bombed out by Sergiy Derevyanchenko in 2017. If he is Quigley’s Waterloo, then it was never meant to be the Irish prospect.